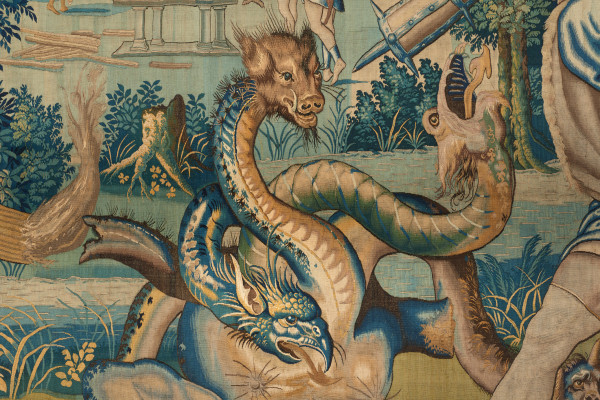 Walking out of writer’s block and starting this blog has not been a stroll through the Elysian Fields, but things have been okay. Until yesterday.

I was engaged in a favorite pastime, collecting author quotes, when I stumbled upon another writer’s blog. I read a few of her posts; they were really good. Exploring further, I learned that the writer is enrolled in an MFA program, that she is regular attendee at writing workshops and author talks, that she has been published in several literary journals and in a few national publications—and, she has an agent! The writer is but a few years older than I am and she has accomplished all of this while working full-time and raising a family.

What have I been doing all this time? Have I squandered my life away? Is it too late now?

With the botanical growth of the Hydra’s heads, I knew that my writing life was in peril. The monster was too powerful. How can a single-headed, two-handed, mortal expect to slay such a beast? I am no Heracles!

And then, a flash of remembrance—my dear childhood friend, Robert Graves’s Greek Gods and Heroes. I had spent many moons in the company of gods and goddesses and demigods (those powerful and beautiful human/divine offspring produced by the unchecked libidos of the gods), perhaps they held the answer. I pulled my frayed and faded friend from the bookshelf, laid to rest the dried spider nested in the spine, and flipped to “The Labours of Heracles.”

As a boy, Heracles took far more interest in fighting than in reading, writing, or music; he also preferred roast meat and barley bread to honey cakes and fruit pies. Soon he became the best archer, the best wrestler, the best boxer alive.

Not an encouraging start for an awkward, vegetarian bookworm. “Okay Prim,” I said to myself, “read on.” I read on to the first labor. Heracles killed a great lion with skin proof of stone, brass, and iron by squeezing it to death. Heracles then skinned the lion and donned the skin. Hope cursed, like Odysseus sailing out to sea, I read on to the second labor.

Heracles versus the Hydra. Heracles shot flaming arrows to draw the Hydra from her lair and then he began to batter her eight heads with his mighty club. As soon as he crushed one head, two others grew in its stead. Heracles waged on, losing ground all the while.  Finally, he drew his golden sword and called for Iolaus, his chariot driver. After Heracles chopped off one head, Iolaus immediately singed the neck to prevent a new head from sprouting, thus the Hydra’s demise. Heracles had not slain the Hydra alone, he had called in backup. Here was my answer! I cannot defeat this monster alone.

As is my default in times of distress, I called upon my beloved authors. Careful to avoid calling on Hemingway (There is nothing to writing. All you do is sit down at a typewriter and bleed.), I crawled to Julia Cameron, the ever-ready artist-encourager, to clean out my wounds.

Doubt is a signal of the creative process…The sickening chasm of fear that doubt triggers to yawn open beneath you is not a huge abyss into which you are going to tumble, spiraling downward like you are falling through the circles of hell. No, doubt is most often a signal you are doing something and doing it right.

Better. No sting, a peroxide clean. Next on my emergency contact list, Mr. Ray Bradbury, beamed in to deal with the practical. (No, practical sci-fi writer is not an oxymoron.)

Just write every day of your life. Read intensely. Then see what happens. Most of my friends who are put on that diet have very pleasant careers.

All stitched up. I should have been handed my papers, discharged to the office checkout window, but something still was not quite right. Enter Rainer Maria Rilke, the school girls’ crush, this grown-woman’s crush, to administer the missing medicine—that mystical salve of kiss on the boo-boo:

Perhaps all the dragons in our lives are princesses who are only waiting to see us act, just once, with beauty and courage. Perhaps everything that frightens us is, in its deepest essence, something helpless that wants our love.

While I struggle to imagine the Hydra morphing into the beautiful Princess Andromeda, even by decree of Zeus, I hope to grow into the thought. Thank you, Rainer, for raising my mind toward the heavens, where both Andromeda and the Hydra coexist in splendid individuality, without rivalry or jealousy, each certain of her brilliance.